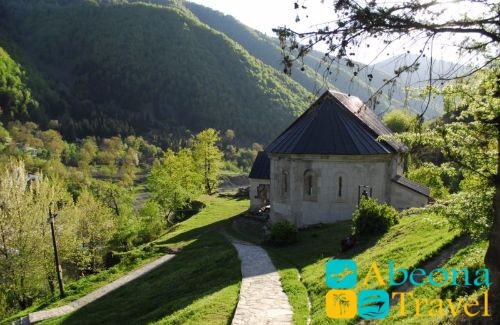 The Skhalta monasery is located in southwestern Georgia, in Adjara AR, 100 km from the city of Batumi. The church stands on the rounded terrace of a high mountain, between the river of Skhalta and its tributary. An area around the church is fenced with a wall. Fragments of which have survived to this day.

At the level of the base, a part of the small chapel (10-11 centuries old) was preserved. There is an evidence of the bell tower above the chapel. Here there is a wine cellar and the remains of other buildings. It can be assumed that Skhalta was a monastic complex. The type of structure is basilica. It is built with a gray-white chiseled stone.

Ornaments are variations of carvings on the stone, existing in Georgia for many centuries. The seven-sided altar is located in the eastern part of the church. On the western and southern sides there are extensions, which eventually turned into ruins. The church of Skhalta was painted entirely. After large-scale restoration works in 1997 (restorer G. Cheishvili) it became clear that the frescoes, were preserved in the altar, on the arch and on the western wall. Painting of the Church by its artistic and stylistic properties refers to the palaeological style of painting 14-15 centuries.

Since the sixteenth century Adjara has become the object of continuous Turkish aggression. The invaders gradually turned the population into Islam, destroying everything, except Skhalta Church. Khoja tried to cross her threshold three times. But he always fell backwards, struck by a powerful blow of the stone. The temple was known as the “local Shaitan” among Turks. And after this fact the temple was left in a peace.