Kveshi fortress is a medieval defensive fortress built between VII – IX centuries, on a low accessible rock. The fortress of Kveshi represented the Royal and princely residence. Here for centuries passed an important trade road.

The first mention of the citadel on this site date back to the VII century, to the era when the neighboring city of Dmanisi has not yet gained its importance and power. At the end of the XII century Kvesh stronghold was in the midst of important historical events. In the late 80 – ies of this century, the first husband of Queen Tamar, Russian Tsarevich George (Yuri) made a victorious campaign towards the city of Ganja and its surroundings. He was 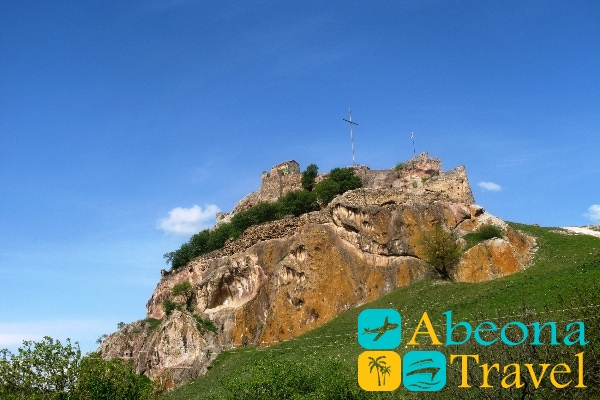 accompanied in this campaign by Vardan Dadiani, one of the powerful nobles who held a very important position at the Royal court.

In gratitude, the Queen gave Vartan a gift Quessoy fortress and two more of the citadel in Kvemo Kartli. But the situation changed dramatically in 1191, when Vardan Dadiani openly rebelled against the throne and joined Prince George, by then already expelled from Georgia and preparing to regain by force what he had lost. The rebels fortified themselves in Kveshi, but were defeated and their possessions, of course, lost. Since Kwassa the town was granted to the princely family Mkhargrdzeli.

Since the end of the XV century, these places again change owners and come under the control of princes Baratashvili, whose influence in Kartli begins to increase from this period. Kvesh fortress does not lose its importance in the XVI century, as evidenced by the fact that the kings of Kartli turn it into their main residence. Until the end of the eighteenth century, it served as one of the main outposts to deter enemy forces entering the region from the South. Since the XIX century it was already the Russian garrisons.

Today, the entrance to the fortress is a tunnel cut into the rock. The walls and fortifications were built in the middle ages, their total length is 220 meters, the height ranges from 1 to 8 meters. A small Church built on a rock inside the fortress dates back to the 18th century, although it is known that it was built on the site of a much older, but already extinct temple. Traces of antiquity on the territory of the fortress a lot. The most ancient of them are stone steles of VII-VIII centuries, in some places