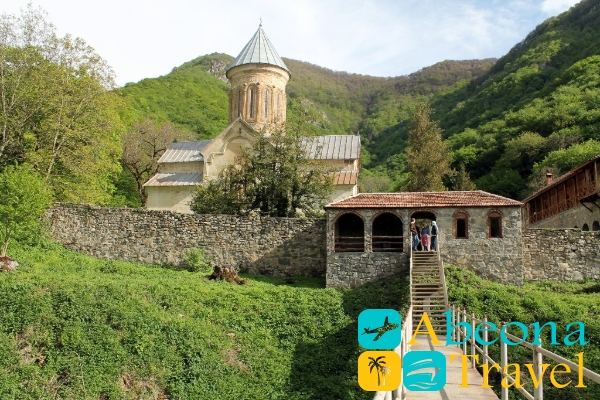 Kvatakhevi monastery dedicated to the Dormition of the Mother of God Samtavisi diocese of the Georgian Orthodox Church founded in the XII—XIII centuries as a convent. In 1386, Tamerlane’s army captured the monastery. After the looting of the monastery, the soldiers gathered in the Cathedral monastery Church of captured Christians and nuns, surrounded it with firewood and set fire to it. Since then, the female foot has walked more in Kvatakhevi. Entrance is allowed only to men, in order to avoid desecration of the memory of innocently murdered nuns. Traces of blood of innocently killed martyrs were imprinted on the walls of the temple: they could be clearly seen at the end of the XIX century. The monastery was restored by the efforts of Tsar Alexander the Great in the first half of the XV century.

In the 1730s, when the Lezgin raids became more frequent, the monastery ceased to exist for about 10 years, and the treasures stored in it were hidden in one of the nearby caves, where they lay until 1809. A significant part of the monastic treasures, medieval Georgian jewelry, are now stored in Moscow in the State Historical Museum.

In the 17th century, the wedding of the Kartli king Luarsab and his sister Georgy Saakadze took place in The kvatakhev monastery. After a period of decline, at the request of the residents of Kartli and Prince Tarkhanov, the monastery was revived again in 1849. The restoration under the patronage of Prince Ivan Tarkhanov-Moravova was carried out to 1854. The latest structure on the territory of Kvatakhevi is a chapel Dating from 1872. Closed in the 20th century, the monastery was reopened in 1989.