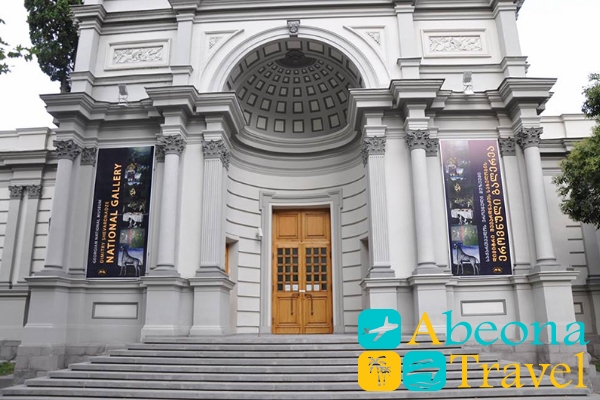 National Gallery of Georgia, “Blue Gallery” is located on Rustaveli Avenue in Tbilisi opposite building of the first Gymnasium. Built in 1885-1888 as military-historical gallery “Temple of Glory” dedicated to Caucasian War. Architect Albert Salzmann designed front face of building as roman Exhibition Palace. Which had been built several years earlier based on the project of Pio Piachentini. It can be said a lot regarding architecture of “Sky blue Gallery”. Different exhibitions are held in national gallery. And permanent expositions consisting of the works of famous Georgian painters – Niko Pirosmani (1862-1918), David Kakabadze (1889-1952) and Lado Gudiashvili (1896-1980).

Construction was finished in 1888. Official opening took place much more later on 11 of February 1907. And the reason was the following for decoration of exponents it was required to collect exponents. The main fact was that picturesque plating of different episodes of Caucasian Wars. Portraits of some commander were ordered to several famous painters. It took them a lot time to finish the work.

National gallery of Georgia consists of 3 rooms with open spaces between each other. In the middle room there are artillery-type weapon, trophy outfit, and antique plate armor; at entrance there are Caucasus equipment, of forces in different period of war with Persia, Turkey and with highlanders of Caucasus, the whole collection of Caucasian weapon and sample of Persian and Turkish military equipment. Works of two another rooms can be divided on 4 ranges. Upper range from top is presented with banners, than comes portraits of leaders of Caucasian wars. Lower is paintings of different painters (I. Aivazovskogo, Baikov, GOrsheldt, I.N.Zankovskii, Kolumberi, F.A. Rubo and N.S. Samokish) and afterwards come vitrine. In exposition was exhibit also different battle like trophy and military medal.

“….The museum was founded in 1888 and was opened in 1907. His Majesty the Emperor upon a petition of I.I. Vorontsova-Dashkova granted from state storage area many relics and trophies, obtained with blood of Caucasian Military. Kindness of his Majesty the Emperor and private donation promoted Museum to be on up-stroke the mark and to contribute true picture of past wars…..”

At the beginning of 20ies all exponents was carried out on North Caucasus, in Krasnodar Region, but in 1934 was returned o Tiflis. But these collections were divided and pass in other museums in different cities. The part of pictures of famous painters was carried out to store-room of State Art Museum of Georgia, and some pictures and subjects in historical museum. weapons and clothing item were transferred in “Goskinprom”. Here they were used as properties while shooting historical movie with battle scenes. At the beginning of 90-ies when Tbilisi Film Studio suffered bad times, unique exponents of “Temple of Glory” were sold to private persons. Today building of Military-Historical Museum is known as State Art Gallery of Georgia “Sky blue Gallery”. But when look closer you can see bars-relief with military theme.

In 1920 in building was opened national gallery of Georgia, known formally as Dmitri Shevardnadze. But in Tbilisi people call it “Sky blue gallery”. Since front face was colored in sky blue color for many years. An idea is belong to famous Georgian painter Dmitri Shevardnadze. By his initiative was opened first exposition of former “Temple of Glory” in 1920. Here are exhibited works of arts of XVIII-XIX century as well as works of modern authors.