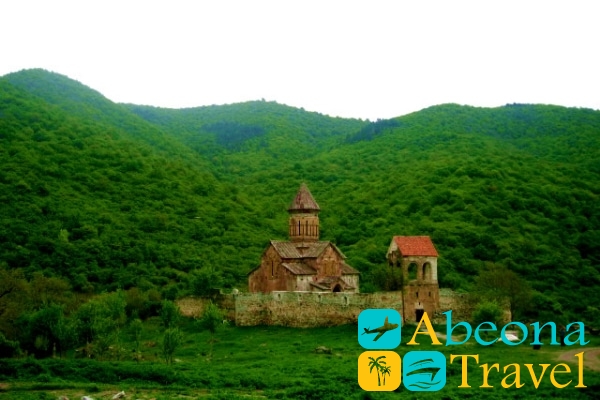 Pitareti monastery is located in the Kvemo Kartli region, in the municipality of Tetritskaro, in the gorge and surrounded by forests, in the valley of the river Khrami. It was built in the XIII century during the reign of Lasha Giorgi. and known for its unique bas-reliefs. The frescoes are in poor condition and only fragments are visible. The monastery can only be reached by jeep. The monastery was a family burial vault of the princes Orbeliani and Baratashvili. Somehow he survived all the invasions of the XVI and XVII centuries and lived until the XVIII, and in the middle of the century it was almost destroyed by the Dagestanis.

The main structure of the complex is the Church of our lady – one of the best examples of Georgian religious dome architecture during the reign of king George. It is decorated with a great number of masterfully curved stone ornaments, and frescoes of different periods have been preserved in its interior. The temple was abandoned a long time ago, but now the frescoes are restored and protected. The outstanding monastery throughout the beginning of the XVIII-th century was closed for good in 1731 after numerous invasions. The building then fell into gradual decay. Earthquakes and the uneven subsidence of the Foundation was the cause of the destruction of masonry and the important frescoes of the fifteenth century, are vulnerable to water seepage. A devastating earthquake in 1988 damaged the dome, the monolithic roof structure, and the stone plaques. The political upheaval of the 1990s led to the abandonment of the village and the loss of a permanent human presence in these places.