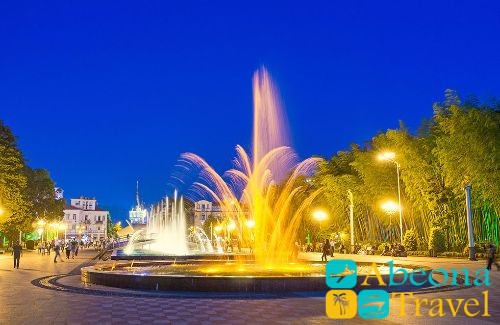 In 1977, the central entrance of the Batumi Boulevard was equipped with color music fountains. The administration of the city of Batumi invited architects and builders from Yerevan to build fountains. In May 1975, they began to prepare the draft and the treaty. The construction itself was started in January 1976. The whole project together with the improvement of the adjacent territories and the construction of fountains cost 1 million rubles.

Most expensive part of the project was concrete work; 60 thousand rubles was spent on the construction of curbs from granite brought from the city of Krivoy Rog in Ukraine and the pool for fountains. All hydraulics was installed by the hydraulic engineer A. Kozhoyan. The design of the fountains was designed by the architect – Georgy Sergeyevich Erqomaishvili the citizen of Batumi.

The head of the group of the construction of the entire project was A.A. Abramyan. The collectivity of the project became a laureate of the state prize for science and technology for the implementation of the Batumi fountains in 1978.
More than 40 similar fountains were built in the former Soviet Union. The first and largest is in Yerevan. The Batumi fountain was the 5th in size and the second largest in the USSR. By now, this is a large-scale construction.