Nikortsminda Cathedral or St. Nicholas Cathedral is a pearl among the cathedrals and churches of the Racha region. Next to the temple is the bell tower of the XIX century. The Grand temple is still a mystery to this day. Many scientists argue about the style of its structure. How can a temple look like one externally and completely different from the inside? Coming closer to the temple, You see an ordinary temple in front of you. Looking closely, you can 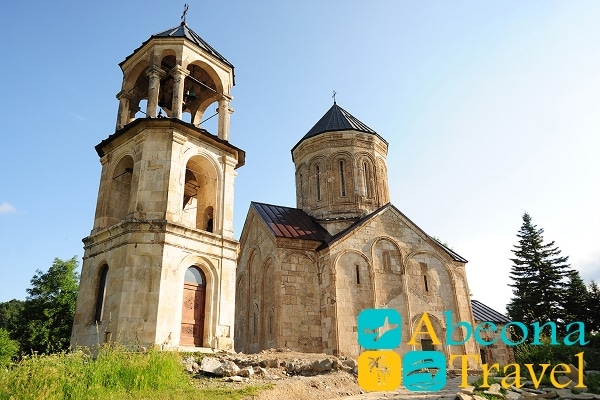 understand that the Cathedral resembles a square, not a cross. Entering the temple You will be amazed at how much reality does not match the appearance. This method of construction was used in the V-VI centuries. Therefore, it is not clear why the Cathedral of the XI century was built on the technology of past centuries.

Nikortsminda Cathedral was built in 1010-1014 during the reign of the first king of United Georgia Bagrat III. He also built the Bagrati temple in Kutaisi. In the middle of the 16th century Nikortsminda fell into decline. It was then, in 1534, the Imeretian king Bagrat III temple was restored and decorated with frescoes. These frescoes have survived to this day. In the frescoes there are all shades of yellow, orange and azure. This creates a festive impression. Outside the walls are decorated with arches, carved ornaments and bas-relief compositions. On them you can see the figures of Saints, images of the exaltation of the cross and the judgment Day. The ornaments of the Racha region used in stone carving are very complex and exquisite. None of them is repeated — these are real stone laces. Therefore, the unique decor of the Cathedral of Nikortsminda is considered one of the richest among the Georgian churches, in addition, when it was created by masters, several artistic styles were used at once.

Currently, this temple is under consideration by the UNESCO Commission for inclusion in the world Heritage List.