Soviet Occupation Museum is in one of the hall of Georgian National Museum. More 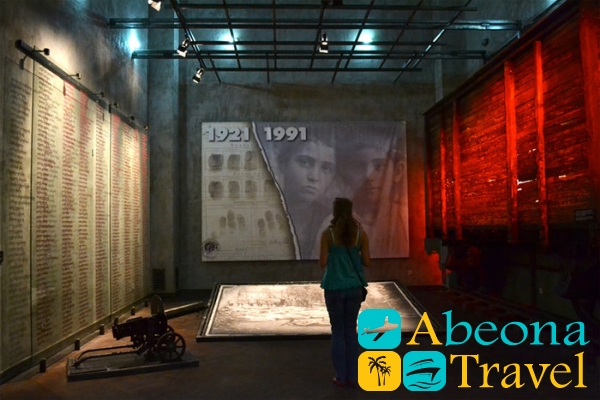 than 3000 exponents are exhibit in the museum. The first is map of Georgia of early 20th century, than comes photos of repress, shotee, banners and posters, guns, printed press of Georgian Emigrants dated from 1921 to 1991 hang in chronology. Special place is outlined for exponents dedicated for three years of independence of Georgia dated from 1918 to 1921, for Soviet rule establishment in 1921 and first years of Georgian SSR existence, as well as for repressions of Stalin. Exposition is concluded by modern map of Georgia with note: “Occupation is continuing” and Abkhazia and South Ossetia are marked by red.

Soviet Occupation Museum differs from other museums of Georgia, which are covered with dust. This one is a new one, with red lights and sorrowful music. Right at entrance there is a part of wagon where you will see Georgian rebels shooted in 1924, on the right hand side clothing of Kaikhosro Cholokashvili, the main person of that epoch. You should visit the hall in clockwise order; you can see a pen which was used during signing independence declaration of Georgia.

The rest are photos, list of repressive, some different subjects. Formally museum covers epoch of 1921-1991. But still there are presented exponent of 20th and 30th. In the very centre there is a table of commissary with the green lamp. It is possible to sit there, to touch black telephone, to take a pen and feel yourself ruler of the destinies.

Exposition is done very ethically, no ethnic nationalism against Russians or the country. There is a few definitions, taking in consideration that guide will explain the facts. Patriots of Russia will be frustrated, there is no aggression against them. Even mainstream journalists will have nothing to write about.