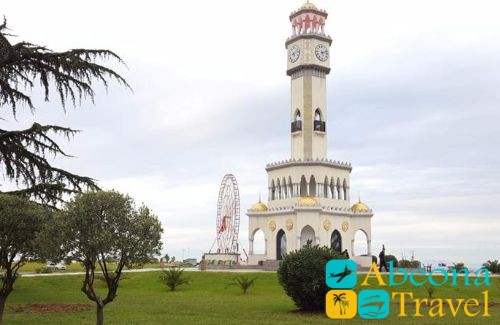 The Chacha Fountain or Chacha Tower was built in 2012, reaches a height of 25 meters and the project, in addition to the fountain, was to include a tourism information center, four outdoor swimming pools and several objects for different purposes.

In parallel, the local population held rallies in those places where, in their opinion, the authorities had to build a mosque of Sultan Aziz. It turned out that while the Batumians are mobilizing forces and trying to prevent the construction of the mosque, the mosque is already being built in the center of the city, disguised as a fountain of the Chacha Tower.

As it turned out, the fountain turned out to be an exact copy of the Sultan Abdul-Hamid the 2nd minaret. Minaret was installed in Izmir in 1901 in memory of the 25th anniversary of the reign of the Sultan. This minaret is better known as the Clock Tower. It is one of the main attractions of the city. The clock tower is also depicted on a Turkish banknote of 500 lire.