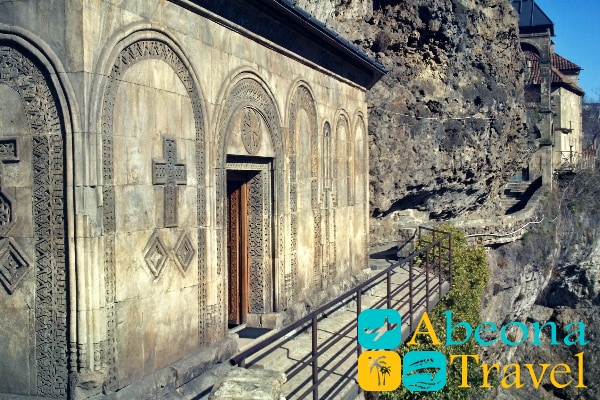 Mgvimevi Monastery small, less known in Georgia cave nunnery named by Holy mother Nativity, located in Chiatura region right next to Chiatura city. Monastery is the rare case of cave monastery and is look like Vardzia. Nowadays it is the one of two monasteries of Sachkhere-Chiatura eparchy.

Historical data is less preserved it is only known that it was constructed in XIII of an epoch of “Golden Century” of Georgia by the rule of Tamara Queen. By the end of XIV survived from an invasion of Tamerlan. Mgvimevi Monastery is hidden in the big cave, going through the rock at 35m and consist of several caves. You are able to get through after going through long rocky stairs going into the tunnel.

Some frescoes are preserved among them is a portrait of the founder of monastery, Rati rachinskii eristavi, his wife and brother Ninia Kakhaberidze, of XIII century. It is the only one cave temple, cropped out the rock and located in the cave without shapes. The part of which are stalagmite. When going out the cave you will see outside gallery where rocky temple is built in the style of basilica.