In Samtavro monastery much associated with the identity of the man, now known as Saint Gabriel Samtavisi. He was born in Tbilisi in 1929 in Isani district. As a child, Vasiko Urgebadze believed in Christ and preached the gospel. With his own hands, Vasiko built a Church in the yard of his house in Tbilisi, which exists to this day. The authorities destroyed Several times the Church, but each time he rebuilt it.

Even while serving in the army, Vasiko continued to fast and go to the temple (he served in Batumi, where the Church of St. Nicholas operated). After the army, he declared mentally ill, which further saved his life.

In 1955, Vasiko became a monk under the name of Gabriel. In addition, in 1965 on mayday demonstration made an unprecedented act-publicly burned Lenin’s portrait. Horrified the people said: 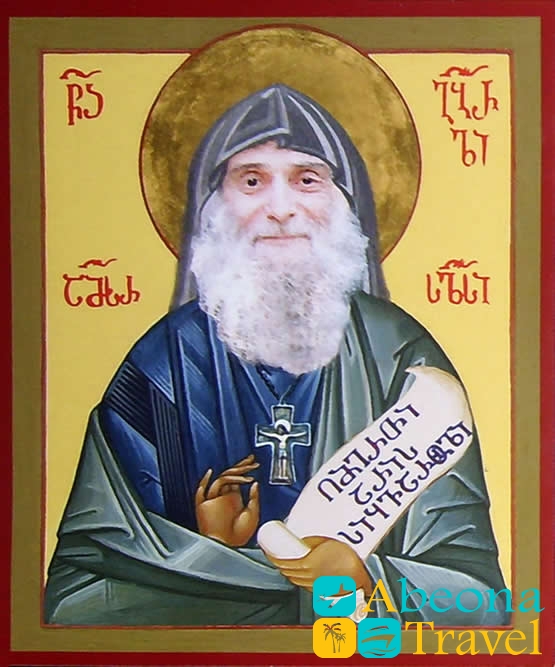 – I did it because you cannot worship a man. There, in place of a portrait of Lenin, should hang the Crucifixion of Christ. Why you write: “Glory to Lenin”, after all such glory is not necessary to the person. We must write: “Glory to the Lord Jesus Christ, who overcame death and gave us eternal life.”

The crowd beat Monk Gabriel. Half dead was taken to the KGB detention center. In Moscow learned about the crime and demanded rebel without trial. Torture forced him to admit that he had committed arson on behalf of the Church, but the monk was firm, and the interrogation called Lenin “beast” and “Satan’s henchman.” Eventually, the sentence overturned and diagnosed as “a psychopathic personality predisposed to psychotic schizophrenic failures.” Psychiatrists have declared that he is constantly in hallucinations.

In 1971 he became the Abbot of the monastery Samtavrisi. He settled in a large round tower, which is now clearly visible near the Cathedral and which should not be confused with the bell tower next door. He was very famous in Georgia, and many people always came to him.

In the last years of his life, he lived in the tower of the monastery of Samtavro and was seriously ill with dropsy. Gabriel died on 2 November 1995 and buried in the cemetery on the North side of the Transfiguration Cathedral. His grave almost immediately became an object of pilgrimage. In December 2012, he was canonized as a monk. It is a kind of canonization when a monk is declared a Saint for a correct monastic life and for a successful attempt to be like Christ.

On February 22, 2014 the fact of incorruption of relics was recorded. The body of Gabriel with a huge crowd of people was moved to the Cathedral of Svetitskhoveli, where he was then returned to Samtavro. In 2015, in autumn, a special stone canopy was built inside the Church for the relics of St. Gabriel.