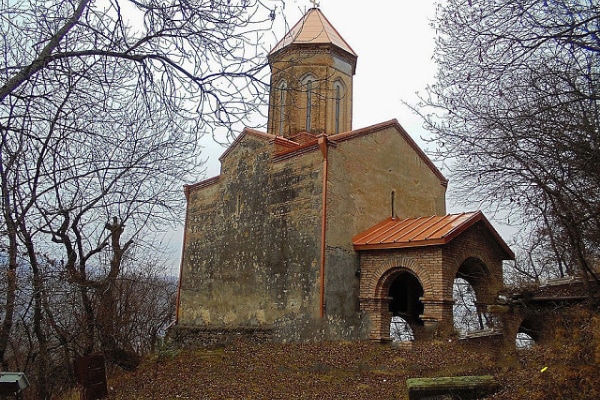 Numerous artificial caves, dug in the rocks, surrounded by historical Bodorna Temple. According to legend, the caves of hram-bodorna-gruziya sheltered old men, women and children during the invasion of the Mongols. A small domed Bodorna Temple, crowning a mountaintop, clearly visible from the road. On the facade of the southern wall of the temple of the mother of God preserved the inscription, which States that in 1417 on the ruins of the old temple, the son of a local noble, Mitrofan, built a new Church. In the second half of the XVI century on the South, side there was a small chapel, which has not reached our days.

In 1912, the restoration of the temple carried out, which resulted in the entrance door in the Western wall. If you study the upper part of the slope over which the Church is built, you can find a small cemetery with very interesting tombstones. Preserved graves are likely to belong to the turn of the XIX-XX centuries. Perhaps this is all that known about the history associated with this religious building. You can add that during one of the raids Tamerlane visited here. Although this event in any case took place before the construction of the new temple.

In addition to the caves and Bodorna Temple, here you can see the multi-meter pillars. There are several, but among them there is one that clearly bears on itself (or in itself), the traces of human activity. The column inside is partially hollow; its height is 15 meters, and the volume at the bottom is 4 meters. Most likely it was inhabit by monks, but now this home is also not available — it can only look.