Goristsikhe is the Central citadel of the city of Gori, kotraya rises in the center of the city of Gori on high on a rocky hill. The remains of ruins on the Northern slope and archaeological evidence indicate that the fortress was built in the I century BC. In historical sources, it was first mentioned as “Gori prison” in the XIII century. Several times the fortress was captured and destroyed by mountaineers. There was an era when the fortress was wooden writes Ambassador from Venice Ambrosio Contarini when July 17, 1474, he passed by the city of Gori in Persia: “the City of Gori, then belonging to king Bagrat VI and was built on a small plain at the foot of the mountain on which stands a wooden fortress.” 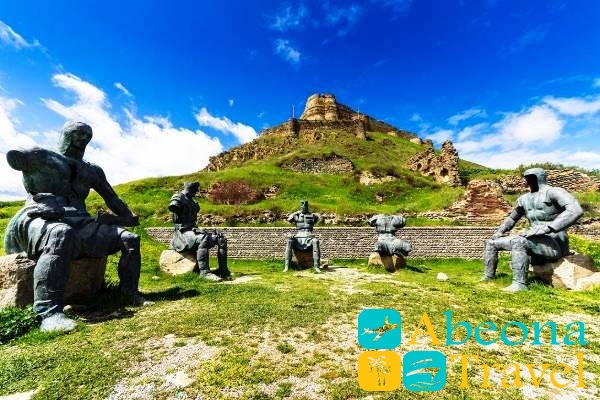 Only somewhere in the XVII century was built a stone structure. King Heraclius II repaired and partially rebuilt the fortress, so that now it is the remains of the fortress of Heraclius. After the annexation of Georgia to Russia and in the fortress for a while stood Grenadier regiment.

Soon it was abandoned as useless, and it began to gradually deteriorate. The coat of arms of Gori County depicted a crumbling fortress, and as a symbol of the fact that Georgia is protected by Russia and does not need a fortress. In 1920, the terrible Gori earthquake further destroyed the fortress.

In August 2008, there was an armed conflict between Russia and Georgia due to which Gori was bombed several times by the Russian air force. At the same time, in 2008, at the foot of the Gori fortress, a sculptural composition of eight huge iron knights was installed. At the round table sit several warriors with swords. Under this have warriors there is no any parts of bodies. Locals say that this is a monument to the ancient defenders of Goristsikhe, who fell at different times defending the fortress.

In the Eastern part of the citadel today you can see the ruins of the Cathedral. Unfortunately, the Cathedral was not spared by the earthquake of 1920. The Cathedral itself once had a secret passage that led directly into the city. Today, it is difficult to understand exactly where it was located, as it was covered with earth. The exact date of construction of the Cathedral is very difficult to determine, but its General features it resembles the preserved monuments of the X-XI centuries. There is a legend that the son of erismtavar Stepanoz Archil hid part of the inherited values in Gori. And this vault is called “Golden mountain”.