Atskuri Fortress stands on the rock at the entrance of Borjomi ravine on the right hand of the Kura riverside. The first saying about the construction appears in the literary evidence of IX century. Formerly here was located walled city, some walls was built during existence of Georgian State. The rest one in the invasions of Turks. Tunnel is leading from fortress to river with ensure locals with waters. 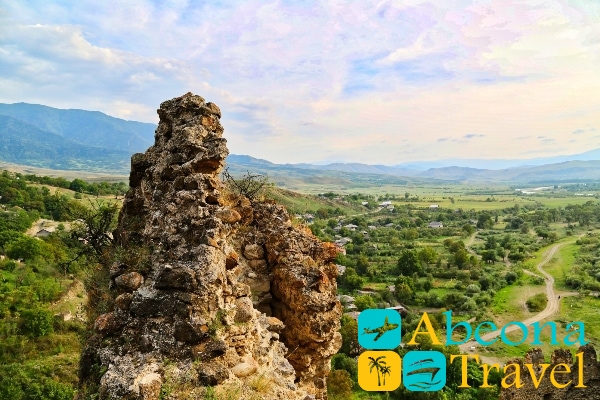 Archeologist found out that people had lived here even in Bronze Age. Progenitors of the fortress appeared here in IX century. The next one dated by XIV-XVIII centuries, ruins are still preserved. In the fortress city was Atskuri temple, had built by the rule of Vakhtang Gorgasali. There are some frescoes fragments preserved on ruined walls and Icon of Atskuri Holy Mother saved within the walls of the temple. According to legend it was brought here by Apostol Andrey when Christianity had been spread in Georgia.

During 1259-1260 Mongols invaders came through. King David VI Ulu had been broke out against them. Among with that in 1283 earthquake ruined fortress and the dome had broken down and covered an Icon within church walls but doesn’t harm it. Furthermore an Icon several times was taken from the fortress (in Gelati) and was bring back.

Atskuri was in the rule of Turks up to 1828. At that time Turks had been defeated near Akhaltsikhe and bring back fortress to the general Paskevich. Adrianople Peace Treaty contracted on 2nd September of the same year was assigned by Samtskhe to Russian Imperia. Georgia was a member of Imperia and Atskuri was revive to the roots. But unfortunately without the temple which was ruined by the end of XVIII century or at the beginning of XIX century.