Dirbi Monastery located near the town of Gori. Of the buildings of the architectural complex preserved Church in honor of the assumption of the Blessed Virgin Mary, the bell tower, the ruins of the Bishop’s house and Marani (wine cellar), fragments of the surrounding wall and the fortress of the late Middle Ages.

The Church was built between 957 and 967, as indicated by the construction inscriptions of the Eastern facade carved on asomtavruli and nushuri. They mention the names of the Abkhazian king Leon III (957-967), eristav Kartli John (2nd floor. X century), Abbot of the temple of Abraham and donors Otimize, Tevdore, Guram (X century). The first news about the monastery belong to the XVI century.

According to the charters of the kings of Kartli Simon I, rostom and Heraclius II, the Church of Dirbi in the XVI-XVIII centuries. At the same time belonged to the Cross monastery and the Holy Sepulchre in Jerusalem, which at that time owned by Georgians. It is known that the temple of Dirby paid taxes to the Cross monastery until the beginning of the XX century.

In 2008, the village of Dirbi and its monastery was almost in the center of the fighting of the Ossetian war, but no 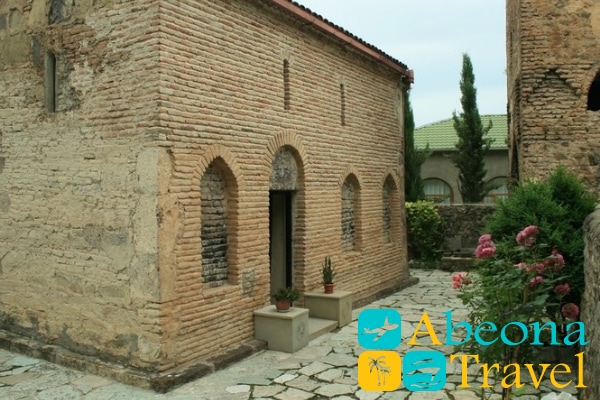 bomb fell on the village.

Also, the monastery of Dirby is known for the icon of the most Holy Theotokos, who carries the baby Jesus under her heart.

The miraculous Fresco of the virgin “Dybskaya (“Interesting”) (XIV C.) shows the name Church of the Dormition of the Theotokos in the village Dirbi. In the fresco the virgin is depicted in the sixth month of pregnancy. She stands with her hands raised to the heavens and her hands open as a sign of her innocence and purity. The Theotokos of Dirbes is unique throughout the Orthodox world not only from an artistic point of view, but also with her divine patronage by performed miracles. Childless couples come to her in an endless stream and with deep faith and hope ask her for children.