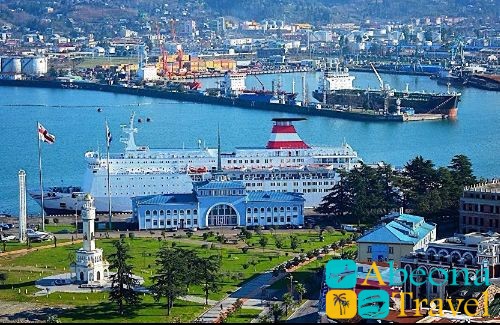 The history of transit shipping through the Batumi port originates from a deep antiquity. In 1878 the port was declared a port-franco (for the period until 1885). By the end of 1884, a project for further development of the port was created. The authors of the project were the first head of the Batumi Sea Commercial Port, Admiral Greve and engineer Georg Alkovich. The project began in 1885. From the outset, the main factor in the development of the Batumi port was oil. The basis for this lay the construction of the Baku-Tbilisi railway line.

An intensive growth in the volume of exported oil necessitated the development of a corresponding port infrastructure. The volume of the first export of petroleum products, carried out in 1883, amounted to 3 million poods. Associations of the Rothschilds, the Mantashevs and the Nobels were especially distinguished out of the 18 societies involved in the transportation of oil.

Robert Nobel, the eldest son of Emmanuel Nobel, arrived in Baku In 1873, encouraged by the thriving oil business, he spends 25,000 Russian gold rubles for the purchase of the Baku oil refinery. As a partner in the oil business, Nobel chooses Baron Rothschild, who in its turn gets acquainted with the sea broker F. Lanes and merchant M. Samuel. They first came up with the idea of creating tankers – ships for the transportation of oil.

In 5th January of 1892 in the UK approved the design of a tanker. It was a new type of maritime transport. In the depths of the Batumi Bay, an 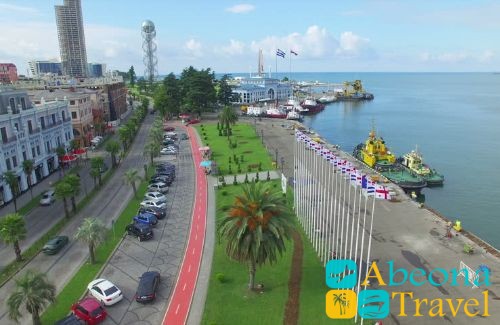 oil-loading enterprise was built in 1885-1892. Two oil berths 80 and 95 meters in length were built to receive ships loaded with oil products in 1886-1889. The first British tanker “Murex” left the English port of West Hartlepool in 1892. He headed to the port of destination – Batumi. And from there, loaded with oil, headed to Singapore and Thailand. The same vessel, loaded in the Batumi port, opened tanker traffic along the Suez Canal on August 23 of 1892.
In 1900, the Baku-Batumi oil pipeline was completed.

Thanks to the Batumi port Russia was able to catch up with. And then surpass, the United States of America in the extraction and export of oil in the shortest possible time. By the beginning of the 20th century, Batumi Port became one of the leading ports of the Black Sea in importance and cargo turnover. Later, 5 more berths for tankers and dry cargo vessels were built. The cargo turnover of the port increased, the range of processed goods expanded. In 1923, during the Soviet period, the Batumi seaport was transferred to the register of ports of the highest first category, which further accelerated its development. At that time, it was one of those ports of the Soviet Union, whose cargo turnover exceeded 1 million tons. The Marine Station was built in 1959-1962. By 1967 the port could already take large-tonnage vessels on an external roadstead.
Participation in the transportation of oil turned the Batumi port into an important junction of the Eurasian transport corridor and into a major transport facility of international importance.

The building of the current Marine Station was built in 1962 by the architects Novakov and Kremlyakov. It is equipped with a navigation center. The architectural building of the Seaport is considered to be one of the symbols of Old Batumi.