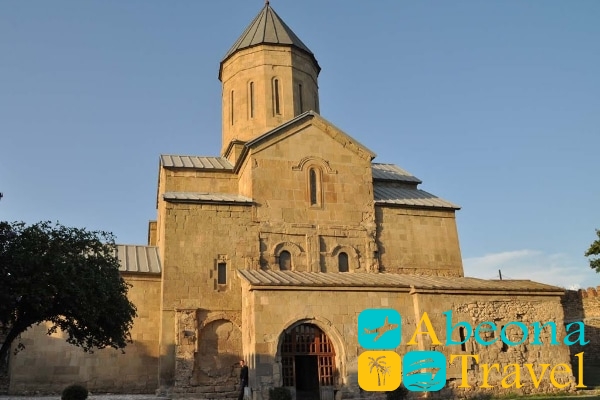 In the IV century, king Bakar, son of the first Christian king Mirian founded The Tsilkani Episcopal Church, which later became a Cathedral. It is located in the village of Tsilkani, 15 km-Ah from the city of Mtskheta. This is one of the first places where the spread of the Christian religion began. The complex includes the Church of the virgin and the 8th-century fortress. On the site of the current temple, built during the reign of King Vakhtang Gorgasali (V century) was built a three-nave Basilica, which in the VII century was converted into a domed temple. In the future, the temple was updated several times.

Tsilkani Cathedral unites two types of buildings of different times: the Church of the ceremonial type (the end of the IV century), the three-nave Basilica (V-VIII centuries) and the domed Church. By the end of the XIX century the temple was restored. Fragments of frescoes and lapidary inscriptions are preserved in the interior. In the sixth century, Jesse (IESE) Tsilkneli, the Holy Bishop of Tsilkan, one of the Assyrian fathers, was active in Tsilkani. He was the initiator of the construction of a watering channel “Zilonis Ru” (Stream Tsilkani).

In the first half of the XVI century there was a dispute between The Tsilkan Bishop and the Mtskheta Catholicos, who resolved Luarsab I by dividing the territories of the diocese. At the end of the XIX century, there were 40 villages in Tsilkani, and the diocese of Tsilkani ranked 4th among All Georgian dioceses