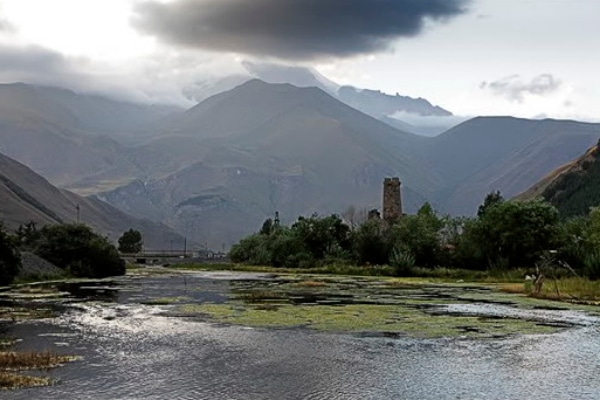 Partially ruin fortress Sno built on the border of XVI-XVII century and is the main of the defense fortress of Georgia. Sno ravine or Gudushauri extend to southeast, trends between The Greater Caucasus ridge and Kuro-Shan massive, and ends with beautiful massive Chaukhi. Snostskali river flows on the bottom of the ravine, first huge right inflow of Terek (In Georgia “tergi”). An interesting is turrets in village Sno stands on the hill in the middle of village. Fortress surrounded almost rounded stony wall, in the middle uplifted tower with the shape of pyramid. Based on scientific assumptions fortress built approximately on the border of XVI and XVII century. Fortress Sno blocked the ravine and it was possible to ferry across to Khevsureti, Pshavi and Mtiuleti. 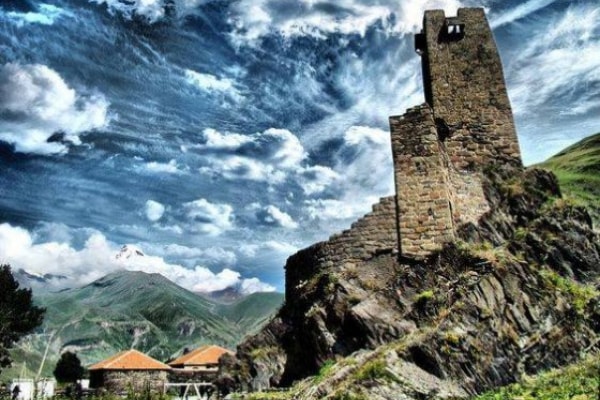 Fortress Sno is small, uplifted on the rock and is inaccessible, builder does not known. Based on legend fortress belong to Shiola Gudushauri and even today, it is sometime calls Gudushauri Fortress.

In 1731 Aragvi Eristav Bardzim wrote to king Vakhtang the VI who was in Russia at the moment and complain about uninterrupted Lezgins invasions describing raids from Khevi and then raids on Sno and Arsha Fortress. Unfortunately, there is no evidence of any further actions.

Fortress has rounded fence and one tower. Fence is complicated consist of many defensive elements. Single entrance is from the east. Builder design fortress the way that fenced walls levelled up to the one level, but due the inclined relief the height of the wall from the north part reaches 4m and from south 10m, tower has pyramide shape, lower part of 16m high tower is massive, in the upper part there are three stores. Tower serve as a view point and was for military operations and it is possible to get to tower by access ladder.

Probably in the second part of XVI century or the first part of XVII century fought between locals and Eristavi reinforce. From the other side north and northeast neighbors of Khevi intensify. Fortress Sno play a role of strategic main point. From the first time the main road going through connecting Khevi and north counties with the center of Georgia (ravines: Terek-Sno Gudamakari-Aragvi), from the second way road leads to Khevsureti and upwards in mountain to the breed of north-east Caucasus. Consequently fortress Sno was provisional fortified point of Khevi.

Beside ancient fortress and tower in Sno there is a modern, renovated temple which is residence of Patriach of all Georgia Ilia the second.