Urbnisi is a large city that emerged with the Iberian Kingdom. The city was walled and well landscaped. In 500 year in it built Basilica. It’s the only thing left of Urbnisi now. In 736, the Arabs marched here and razed Urbnisi to the ground, as well as many other cities.

The temple was founded by Thaddeus of Stepantsminda, one of the thirteen Assyrian fathers in the VI century. the Basilica has come down to us in a rebuilt form, as many times destroyed and burned. It is a simple and large temple on twelve strong pillars on three naves. There are many inscriptions on the walls of the monastery, which are considered to be ancient examples of Georgian writing of the VI-VII century.

Near the village there is a domed Church of Ruisi (VII—IX century), serving as the center of the diocese of Urbnis and Ruiz. Both the monastery and the temple are known for the local Church Council convened here in 1103-1104 by the Georgian king David the Builder to solve problems in the spiritual hierarchy.

It is believed that the first temple on this site was built by king Vakhtang Gorgosal sometime in the late V century. It 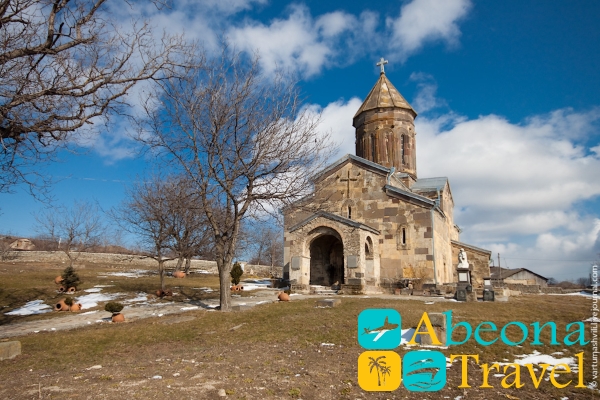 was a place known throughout the country and chroniclers Anton Mroveli and Leontius Mroveli worked here. It is believed that it was here in 1072 that king gergius II was crowned. A little later, the Cathedral was helped by Burdukhan, the mother of Queen Tamara. The temple was badly damaged during Timur’s raids, of which there were several around 1400. After 1412, Tsar Alexander I restored it.

In 1811, the Russian administration closed the temple, and in 1920 the famous Gori earthquake, which destroyed Gori, did not spare the temple. In 1836 – 1938 there were restoration works. Then the restoration was repeated in 1950-1953.

The inscription on the plate in front of the Cathedral Ruisi: “the Church Gvtaeba (Spasa). Cathedral Church, a significant monument of medieval Georgian architecture. Repeatedly subjected to renewal and restructuring. In the existing building of the oldest / VIII-IX centuries / is the Eastern part-the altar and the adjacent premises. In the X century the building has been thoroughly renewed. In the first half of the XI century. the temple was crowned with a new, twelve-sided, richly decorated dome, and from the South and North to the temple were attached chapels. The temple was severely damaged in the late XIV century, during the Mongol invasion, and again restored in the second quarter of the XV century. the king of Georgia Alexander I. by this time include: the entire upper part of the drum dome, decoration of entrances and most of the lining of the walls. Damaged by an earthquake in 1940, the dome was repaired by the Department of monuments protection in 1952.”