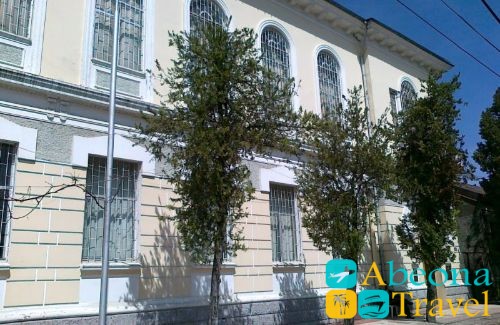 The history of Khariton Akhvlediani Adjara State Museum originates from a small school exposition created in the city school named after Pushkin in March 1908. A group of enthusiasts was headed by the teacher of labor Nikolay Goman.

The collection was constantly replenished, and over time, it was not enough space. Therefore, in 1930 the museum “moved” to a new building (the former treasury), where it is still. Construction in 1883 year. In 1957, the second floor was added to the museum building. The museum has been named by Khariton Akhvlediani. He was the director from 1938 to 1989 since 2005.

The museum occupies two floors and consists of four departments: nature, archeology, ethnography and history. An exposition presents about 170.000 exhibits; among them – rare monuments of flora and fauna, archaeological collections, unique ethnographic material, various documents, photographs, manuscripts, a collection of weapons. In addition to these 4 departments, there is an exhibition hall and a patio, where a mixed collection is represented – from ancient stone crosses, household items, and to the skeleton of the whale. 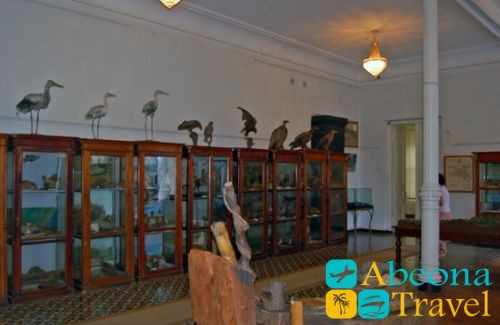 This is the first room where the visitor enters; it contains the early geological map of Adjara. Here is what is written about the geology of this region: “Adjaria has come a long way of geological development. 155 million years ago, its territory was covered by the sea, but about a million years ago, as a result of volcanic eruptions, the sea receded, and land appeared”. Here grew oaks, figs, palms and vines of the rarest grapes. Other petrified plants are also represented here, as well as herbariums – mountain, subtropical, ornamental, medicinal plants. You can see samples of sedimentary rocks and minerals. In the zoological department – insects, stuffed birds and animals, alcoholized amphibians and reptiles, which were ever inhabiting here.

In this department, an impressive collection of around 1,500 artifacts – tools and crafts of the Stone Age, objects found as a result of excavations of the Hellenistic burial grounds, stone idols and the altar of the pre-Christian era, silver, bronze bracelets, collections of pottery, numismatic collections. In large quantities, the museum presents Greek ceramic products with various ornaments. Among these exhibits a special place is occupied by the crater (dr.-Greek κεράννυμι – mixed) with the depiction of scenes from the myths of Ancient Greece, which is the visiting card of the museum. In this vessel, the hallmark of which is a wide mouth, mixed wine and water. This 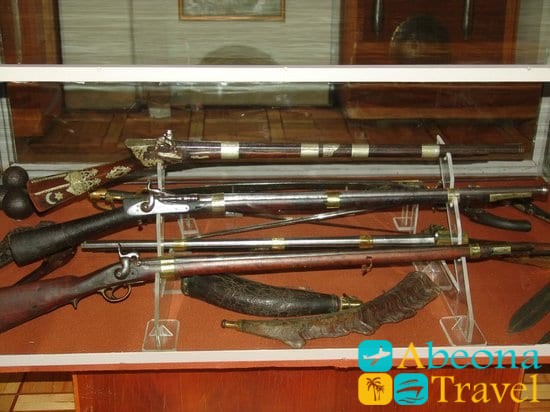 artifact was found in 1967, during archaeological excavations in Pichvnari, near Kobuleti, and it belongs to the V century BC. This is a fairly rare exhibit – there are only three such craters in the world. The other two are kept in the Louvre (France) and the Boston Museum of Fine Arts (USA).

Here you can see a chest for a dowry, a wardrobe. Furnishings complement clay and wooden utensils, wooden skis, wicker baskets. A copper plate decorated with Arabic script is noteworthy. Near is the life-sized model of the weapon workshop. There is an amazing collection of women’s wedding dresses of the XIX century. In the next showcase: chakura (men’s red clothing), Asian (leather boots), chokha-shali. The collection is complemented by handkerchiefs, carpet, gloves, and patterned socks made by the Adjarian craftsmen of the 18th and 19th centuries.

Here you can see photos of cultural monuments, weapons, photos of famous people who left a trail in the history of Adjara. Particularly noteworthy is the collection of weapons from the times of the Russian-Turkish War (1877-1878): cuirassiers’ spears, short sword, scimitar, flint weapons, Berdan rifle, musket, grenades, pistols; next to the equipment of the Georgian soldier: armor, mail of the XVI century (weighing 30 kilograms), helmet, Georgian sword “Gorda” of the XIX century, daggers, pistols, spearheads.
In the courtyard of the museum there are a number of exhibits; including the 18-meter skeleton of the whale. Captain Alexei Solyanik and captain Abesalom Zenaishvili donated it to the museum in 1962. The whale was killed in the far waters of the Antarctic.