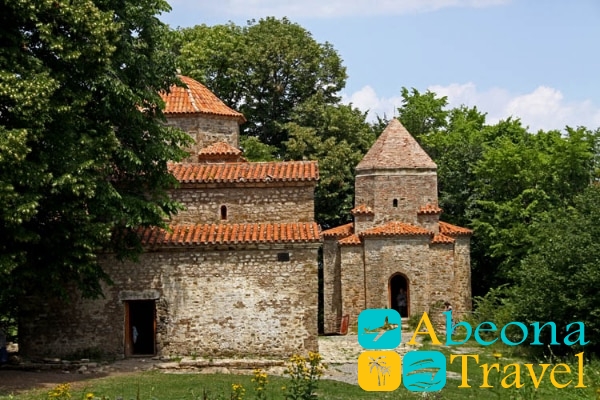 Dzveli-Shuamta (Old Shuamta) before the monastery complex, consisting of three churches, several chapels and the remains of residential premises. Located in the foothills, 7 km from Telavi. The earliest of the buildings is a typical three-aisled Basilica of the V century Following chronology of Kakheti – in the style of the Jvari Church in Mtskheta, belongs to the VII century with the remains of murals the XI-XII centuries a Miniature domed Church of the VII century of the type of Jvari, but without corner rooms and facades. Here the Russian Embassy sent by Tsar Boris Godunov with mission to the Kakhetian Tsar Alexander II stopped. 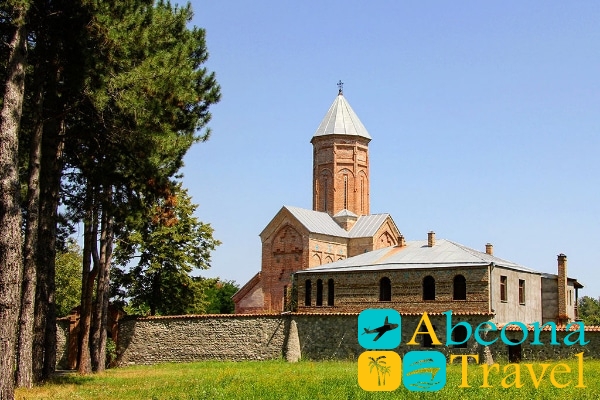 2 km from Dzveli-Shuamta is Akhali-Shuamta (New Shuamta) is the Monastery complex of Shuamta monastery 16th century domed Church (16th-17th centuries; paintings of the 16th century). The monastery is located in a wooded area, at the foot of the mountain Tsivgombori. Got its name from the location – it is surrounded by mountains on three sides, and he stands on a flat hill among the mountains, which means “Shuamta”.

The main Church in the name of the Nativity of the virgin.

According to legend, the monastery was built by the Kakhetian Queen Tina, the daughter of the Gurian Prince. As a child, she had a dream that she would build an Orthodox Church. Was shown it in dream and place, where he should be, but not was openly where it is. And only being already the wife of the Kakhetian Prince Levan, Queen Tina learned the place specified to her in a dream during a trip to Georgia. There was founded a monastery, which later took monastic vows Tina herself.

The monastery had a rich sacristy, where he kept the donations of Georgian kings and of the nobility. There was also a large library. In the 19th century. the main Church of the monastery became the place of the generic burial of Chavchavadze. Currently, the convent has been restored here. Initially, the monastery Church was painted with frescoes, but after the abolition of Georgian autocephaly in the XIX century, the walls of the temple were painted white. In the XX century, the paint tried to remove, but only managed to restore some fragments of the frescoes.