By the end of the life of the king Archil black clouds like dragon wings hung over Georgia. After the feuds in the Caliphate, Emir Asim, who seized power, decided to take revenge on king Archil for the fact that he refused to intervene in the dynastic struggle, where the son, to seize power, strangled his father and poisoned his mother, and his brother stabbed his brother in the back.

With hordes of Arabs, the Emir invaded Georgia, threatening to expose it to new devastation. The invasion was 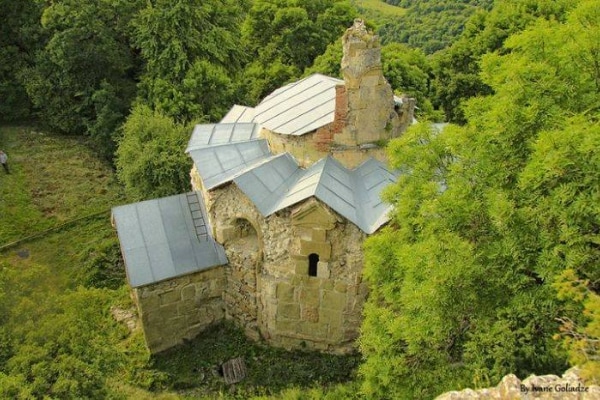 unexpected. The king did not have time to gather an army, and could hardly resist the powerful Caliphate, so he decided to come to the Emir to prevent bloodshed. He received the king with honor, went to meet him and promised not to ruin Georgia. However, Archil’s enemies told the Emir that he knew the place where the treasures of the Byzantine Emperor Heraclius, taken out of Persia, kept, but he hid it from the Arabs.

Asim ordered to chain the Georgian king and bring him to trial. Archil replied to the Emir that he had heard from his grandfather as a child that the Byzantines had seized the Treasury of the Persian Shah Khosroi and taken it home, and some were left in Kutaisi, but then, fearing the Arabs, sent the remaining gold to Constantinople. The Emir knew that the accusation is false: not the custom of the Greeks to bury his wheat into the furrow of another field. However, he decided not to let the prisoner live. King Archil loved by the people and respected by Asim’s predecessors, and in the eyes of the usurper, this is the greatest crime for which there is no mercy and mercy.

The fate of the king decided. The Emir demanded from Archil, that he converted to Islam, threatening them with torture and death. The king replied that for him death is a renunciation of faith, and martyrdom for Christ is eternal life. The Emir knew that torture will not break the king, and he will only show his weakness, so, calling in the executioner, ordered the execution of Archil. The executioner, obeying the order, did not even lead the prisoner out of the camp, and cut off his head near the tent of the Emir. The body of the king thrown eaten by animals, but the predators, as if bowing to the feat of the king, did not touch it, and it lay on the field without traces of decay. The inhabitants of the village of TBA secretly took the body of the Martyr, and buried it in the mountains, the village of Nadokra, in the temple built by Archil himself, as if the king had prepared a tomb for himself during his lifetime.

This temple stands on a gentle slope of the mountain, covered with dense forest. There is always a deep silence, like a lonely bird with his singing, and the trees rustle of leaves, afraid to disturb the eternal sleep of the king. Here the air filled with a special purity, as if sanctified by the breath of the king’s mouth. This mountain is similar to the throne from which king Archil inspects his possessions.

It seems that in the twilight of the Nadokra monastery shines an invisible light, and on the tomb of the king written the words: “Here is the place that I loved; here is my peace forever.”