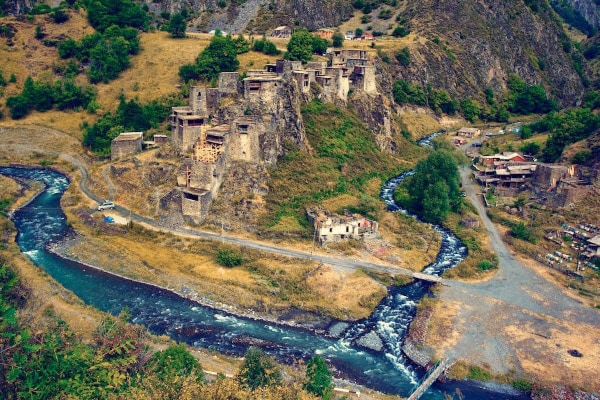 On the slope of the Greater Caucasus ridge, in historic region of Khevsureti located Shatili village. Village represents fortified fortress and mentioned in sources as village – Shatili fortress. Shatili is the most real fortification complex, where you will see 60 defense towers, serving as well as dwellings. House-fortress adjacent to each other creates defensive wall, which protect village. Shatili connected to an outside area by narrow road through Argun ravine, Tower-houses connects many stairs and entrance and it is possible to move from one tower to another without going out. Tower height is from three and 5 stages: on the first stage kept beef cattle, on the second birds and small cattle and on other floors there are all sorts of supplies and the lasts floors were occupied by locals.

Chechnya is located from the north of fortress and Shedala translated from Chechen language as “Country of Glaciers”. The first reason for building the fortress was this fact; later on, the strategic goal of Shatili was to defense from Chechen. Among with that fortress protected the border between two religions worlds: Christianity and Islam. Shatili populations were skilful archers. Chechen was not able to subdue fortress. While invasions Chechen ruin dam on the Shatilura River and the water grow turbid, it was signal to Shatili populations, and they were warn regarding the raids. 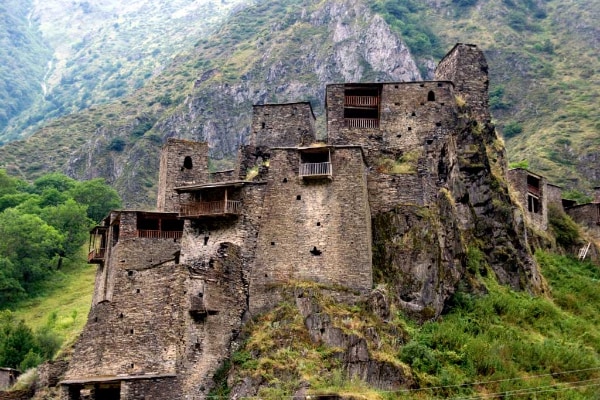 In 1813 many buildings of Shatili ruined by Russians, the biggest fight happen in 1843 when Chechen army conquest the village but locals disrupt an attack. Chechen lost 100 people as well as their leader Akhverdi-Magoma. From khevsurian side only two soldiers died.

Life had stopped here due the bad developed infrastructure and roads are impassable in wintertime. In the middle of XX century locals move to leave even land and in settlement of new Shatili located little bit higher of old one. Now Shatili is open for visitors and you can went up the top pf tower and enjoy picturesque view from there. You can only stay here tonight in the tower in case if you will have any necessary things to stay with you as well as warm clothes.

In any Khevsureti, settlement there is a saint place called “Djvari” where conducted praying and the ram immolated. It is an analog to tusheti “nisha”. Shatili Djvari located between Old and New Shatili. According to the rule, women are prohibited to enter Djvari, but in Shatili, it is closed for everybody, in order not to explain to everybody the rules. It means theoretically men are allowed to enter but with special permission.