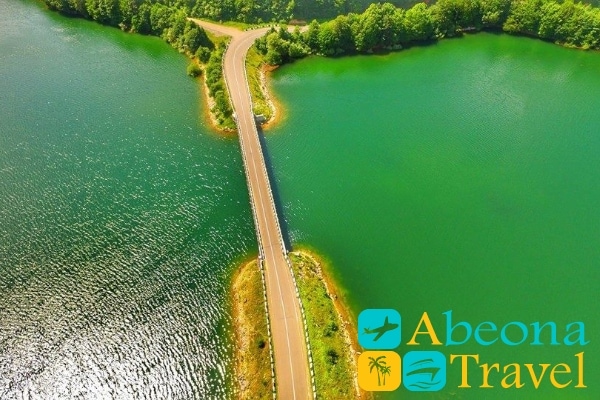 Lake Shaori is an artificial reservoir formed by the Shaori hydroelectric power station on the river of the same name. The first unit of the HPP was launched in 1955. This is the highest-pressure HPP in Georgia.

It is located in the mountains at an altitude of more than 1100 m above sea level. It is the largest water body in the lower Racha region of Georgia. Its length is about 7 kilometers. And the maximum width – 2, 5 kilometers. Due to the bifurcated “tail” of the southern part, it resembles a sea monster

The lake is surrounded by hills covered with dense coniferous and mixed forests — mountain range Nakereba. There are several small sandy beaches. It is worth considering that the climate of Shaori is typical for the middle mountains. It is characterized by large temperature changes and overall coolness in comparison with the regions below.

Two bridges were built over the reservoir. From one of them in Sunny weather you can see the snowy peaks of the Caucasus. The reservoir has all the conditions for a wonderful holiday in the lap of nature, including a good fishing and picnic. Not far from the West Bank of the reservoir on a small hill stands the well-preserved temple of Nikortsminda, built in the 11th century.

This is not the most popular place among tourists. But it is ideal for a romantic trip and lovers of gorgeous views of nature.

Seeing the Bottomless lake is possible only in a summer period. It is located high in mountains between the tops of 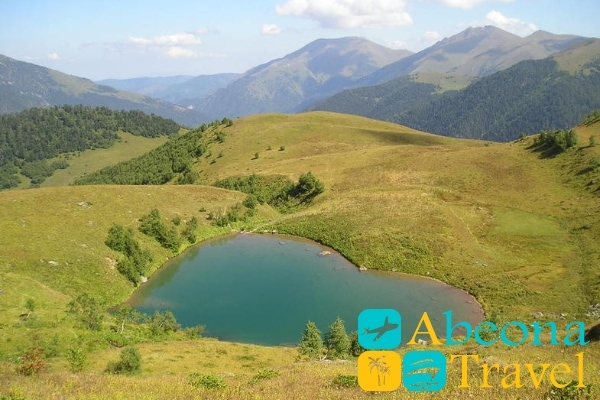 Kititsveta and Dolomisi. The height of tops exceeds three thousand meters above a sea level. From November the lake of volcanic origin freezes approximately to the end of May. In daylight saving time temperature of water of Lake warmed up to plus 10 degrees. In an order to get to this surprizing lake, it is needed to arrange a two-day hike from June to the end of August. To overcome a way, it is needed to pass from 10 to 12 hours depending on the rate of walking. Pedestrian routes to the Bottomless lake begin from located Glola (Racha region) sat down at the resort of Shovi.

In an alpine region Racha there is a lake that has a form of heart. Locals name him Lake of love. A lake is located in the highest village of district of Oni – Mravaldzala, on height of 1840 meters above a sea level. Here is a monasterial complex Mravaldzala, it is monument of Georgian architecture of the XI century. Distance from a district center to the village only 30 kilometres. However a road is not in the best state. And self village on verge of devastation – from last data, only seven persons live there.