On the border of Imereti and Racha regions, on the Nakerala pass is the mountain Nine Crosses or Tskhra Jvari. Translated means the mountain of nine crosses. Once during the Soviet Union here led a cable car from the town of Tkibuli. Now only the abandoned building of the upper station reminds of the cable car.

To get to Tskhra Jvari easier if you go on the road from Kutaisi through Tkibuli. Immediately after Tkibuli and turn left on a dirt road of 3 km. Last time you took a paved road in 1975-1978 year. Therefore, it is 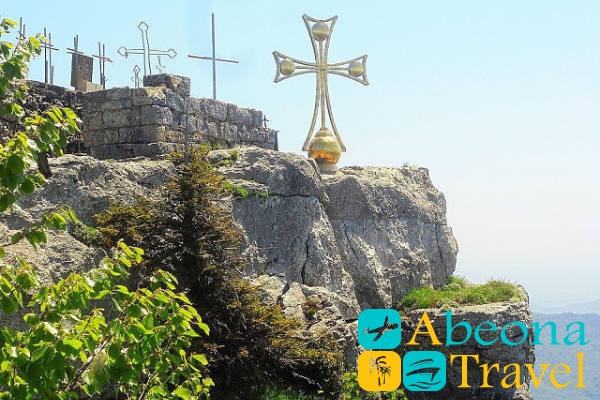 better to leave the car at the bottom and then walk to the peak of the mountain clinging hands and feet for stones and roots. From the top offers stunning views of the countryside.

On its top of the mountain are the ruins of an ancient temple, on the territory of which there are nine iron crosses. Another — the tenth cross — stands on the highest point of the mountain. It’s even visible from Tkibuli. Legend has it that in the village of Tserovani the family lived something progrevatsya God, the boys in this family died before the age of majority. Then all the village people worshiped the Lord, asking not to punish them and give Nine Krestoviny old… And was given a sign from above… to Build a Church on the spot where the dove landed, and put it 9 crosses.

There’s another folk legend about Saragarhi. When the Turks wanted to conquer Georgia, in the neighborhood of Saragarhi lived a family of 9 brothers. They went to fight for their Homeland – Georgia. Each time the father of the family set on the mountain one cross, praying to God to return his sons. The father’s faith was too strong, and the brothers returned home unharmed. Since this mountain is called, Saragarhi.

Every year in mid-June, we celebrated “Saraguros”; people from whole city and different parts of Georgia climbing a mountain with your prayers and requests.

From the height of the mountain offers a beautiful view of the entire Western Georgia – Imereti plain, tkibul Reservoir, khvamli mountain, Alpine meadows, coniferous boxwood eucalyptus groves, mountain range, behind which are the Georgian region of Samtskhe-Javakheti and Borjomi gorge.

Here you can make a lot of charming photos and breathe clean mountain air.