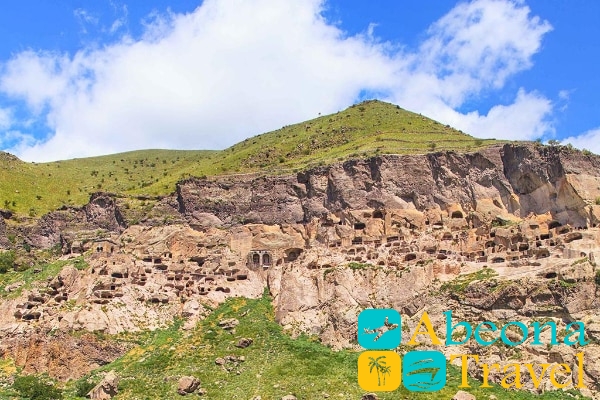 Vardzia Cave Monastery built in 1156-1205 in the rule of the father of famous Georgian Queen Tamara – George the IIIrd. Initially is considered to be only monastery but it was used as cave shelter from invasion. Several tens of thousands people can be hidden here.

By the rule of Queen Tamara Vardzia was develop as a fortress city with state share of participation. Many caves was widen and arranged well. Cathedral of Dormition built and later on, it was develop as a rocky monastery Vardzia. During next 20 years tenth churches, library, baths were constructed in the cave town as well as water-carriage system and the gismol was extended.  Now several caves are deepen in the rock to tenth meter. Vardzia has eight “levels”. Three gismol were coming outside the cave. One day while invasion to the surprise of foreign occupiers thousands of Georgian soldiers come out from gismol.

Queen Tamara had lived for some time in Vardzia in praying, when she saw off her husband to the war with Seljuk’s and he came big with the victory. Army of Persian shakh Takhmasp destroyed monastery in 1551 and by the end of XVI century occupied by Turks. Barbarians burned bleeding and ill monks in the middle of Dormitory Cathedral frescoes became cover with soot and continued to cover with soot in future because Turk shepherd were sheltered in

monastery during winter period. In XIX century the territory released by Russian army. Greek monks came to Vardzia and regenerate monkery. In 1938 monastery was closed and was renovate as a museum. In 1990, monks came back to the monastery. Monastery is reserve museum the part of which is open to tourists since Georgia became an Independent Country.

An interesting fact is an origin of the name of the monastery. Young Queen Tamara was playing hide. Tamara sick in the cave under supervision of her uncle. She wanted to make joke with an old uncle. She didn’t come out for a long time. Her uncle became nervous and start to call her by her name. Finally she run out and cry “Ak var dzia” (which means “I am here uncle”). Uncle was frightened but happy that was able to find her finally. He told everything to great nobles. And they decided to call monastery under construction by the name of the queen.

Vardzia was “invisible town” during heyday. The part that you can see from the Kura bank hidden from view by exterior walls. The great part of the rock ruined and felt down in Kura during an earthquake in XIII century. As a result, monastery revealed and became irrelevant.