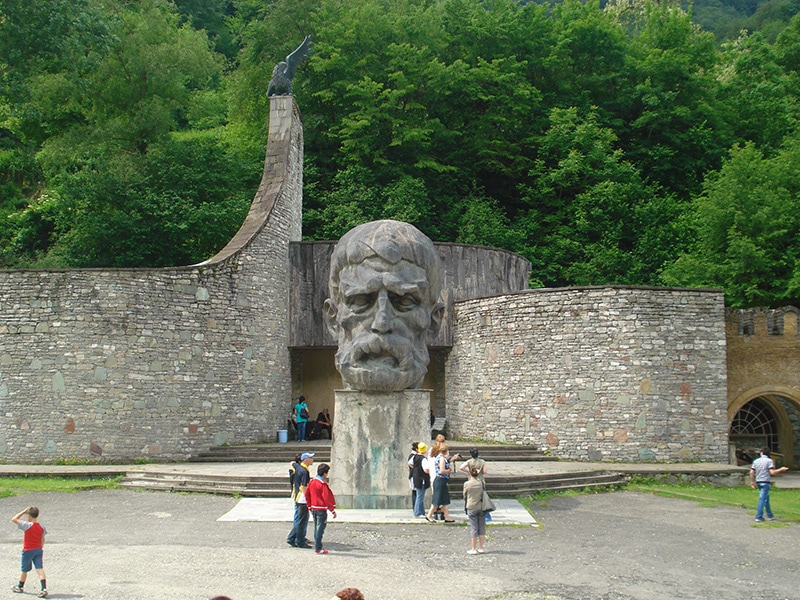 Vaja-Pshavela House-Museum, whose real name is Luka Razikashvili, is located in his native village of Chargali, in Dusheti district. It founded in 1961 on the centenary of the poet’s birth. Now the Museum is included in the cultural heritage of Georgia, but for many years is in disrepair.

Vaja-Pshavela House-Museum consists of a former residential building and an exhibition building. The Museum exhibits highlight the life and works of Vazha Pshavela. Here are the ethnographic materials of the XIX and early XX century, publications of the poet’s works of various years, as well as photographs, sculptures and paintings dedicated to the great classics.

Vazha Pshavela is undoubtedly a popularly beloved Georgian poet and writer. Luka Razikashvili (Vazha Pshavela) was born in the village of Chargali, in the family of a priest, in 1861. He studied in Telavi for a priest, then in Gori for a teacher, then in St. Petersburg for a lawyer, and in 1884 he returned to Georgia, to his native village. The poet in his works managed to capture Georgia genuine, beautiful and strong. Vazha Pshavela enjoyed great love of the villagers, loved the mountains and very rarely went down into the valley. It was in the mountains on long clear nights that he wrote his brilliant poems and poems. The literary debut of the future classic of Georgian literature under the pseudonym Vazha Pshavela took place in 1881. Living a simple life and traditions of the highlanders, Vazha brilliantly managed almost ethnographically to describe the pictures of the life of the highlanders and at the same time to recreate the whole world of mythological representations.

He addressed the heroic past of the Georgian people, the problems of relations between man and society, man and nature, love and duty to the people. Vazha wrote a lot about the trials that befell Georgia. Until the end of life Vazha, sparing no effort, worked, and soon it affected the health of the writer. On June 27, 1915, in a 53-year-old writer died. Vazha Pshavela buried first on the Didube Pantheon of public figures and writers, and later, in 1935, on the twentieth anniversary of the writer’s death, his ashes transferred to the Pantheon of Mtatsminda.

Vazha Pshavela considered one of the greatest modern geniuses of Georgia. His poems combine ancient legends and myths with the tragedy of the common person and have been translated into many languages. In the native village of the writer, the holiday “Vazhaoba” which became national celebrated, thanks to proximity of creativity of the classic to the people.